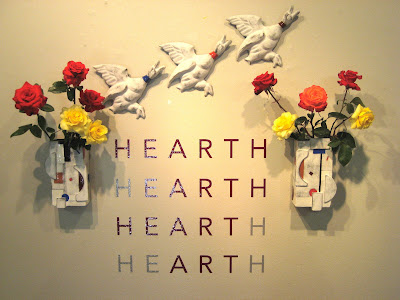 The opening of my show yesterday evening at The Irma Stern Museum was an extremely happy, well-attended and gracious event.
The above image is the work on show at the opening foyer of the gallery. Magnificent roses picked and placed by Christopher Peter (curator) – he got them from Chart Farm – adorn various vases on the show.
Here follows a transcript of the opening address by Deborah Posel. A really inspiring speech which articulates so eloquently the issues which many of us feel concerned about.

I was surprised and honoured to be invited to open this exhibition. After all, I am something of a foreign alien here – still an interloper in Cape Town (having not yet fully arrived), and a flat-footed social scientist, rather than an expert within the fine arts. But what I lack in expertise I hope I make up for in enthusiasm: I am one of those cerebral types with a passion for art.

That includes ceramics – the most tactile and earthy of the arts. Even sculptures have more of a ‘do not touch’ sign about them than a ceramics piece, which invites us to pick it up and caress it. We are much less in awe of a ceramic object than one which announces itself as a sculpture; much more likely, then, to engage with it – and of course, to use it, love it, and incorporate it into our daily lives.

And certainly, the wonderful form, texture and colour of Clementina’s pieces make them irresistible objects to bond with. I have always enjoyed the combination of exuberance and discipline in Clementina’s work – and this exhibition is true to form.

But there is more to these objects than their aesthetic flair. They invite what Stephen Bowers calls ‘a second reading’, in relation to the wider remit of this exhibition – Hearth, Earth, Heart and Art – the matrix of meaning established by Clementina’s framing and naming of her work here.

This exhibition is an affectionate evocation of the emotional, cultural, and aesthetic power of home, signified by the hearth. Home – if we are lucky enough to have one – is the place where the profound and the mundane intertwine, where we ready ourselves to face the world outside: in little ways (such as in eating, drinking, sleeping and getting dressed) and in big ways (as in learning who we are, dreaming about what we could become, locating ourselves in relation to others, in our family, our communities, our country and the world at large).

Our recourse to objects in our homes – utilitarian objects as well as objects of display – is saturated with all of that: the co-mingling of the existentially profound and the everyday mundane.

Objects become sites of memory – recollections that may be affectionately nostalgic, or more jagged and painful. Be it the cup that you inherited from your grandmother, the bowl you bought on your special holiday in India, the chair that your best friend gave you, the table where your children did their homework year after year, or the bed on which your marriage collapsed.

Objects, then, link our present with the past; they remind and re-enact. Their materiality becomes inseparable from their meaning.

There’s more too. Everyday objects are thoroughly entangled with our sense of who we are, with the ways we perform ourselves, with the person we choose to announce to others.

Jean Baudrillard, in his book The System of Objects, is one among many influential social theorists who writes what most of us probably already know intuitively:

Human beings and objects are indeed bound together in a collusion in which the objects take on a certain density, an emotional value – what might be called a ‘presence’. What gives the houses of our childhood such depth and resonance in memory is clearly this complex structure of interiority, and the objects within it serve for us as boundary markers of the symbolic configuration known as home. In their anthropomorphism, the objects that furnish it become household gods, spatial incarnations of the emotional bonds and the permanence of the family group.

So, from hearth to earth to heart to art: there is indeed a fluid transition, an intimate connection that gives this exhibition its symbolic depth and allure.

One of my currently favourite books is called Micro-Trends: Surprising Tales of the Way We Live Today, by Mark Penn. It documents the little, counter-intuitive trends that mark contemporary American society, in low profile but unexpectedly forceful ways (the power of small numbers, if you like – with apologies to Arjun Appadurai).

One of these micro-trends is a backlash against the cultural imperialism of new technologies and their insinuation into every facet of our lives. The people driving this trend, says Mark Penn, are people who are ‘striking back with pens in hand’; people who write on real paper, in full sentences; people with scraps of paper in their pockets with hand-written to-do lists.

He calls them ‘the Great Unrushed’ – people looking for low-tech ways to spend their time and their money.

I suspect many of you here who are drawn to Clementina’s work identify in some ways with America’s Great Unrushed – not necessarily as thoroughgoing Luddites, but in relishing the perhaps old-fashioned allure of beautifully hand-wrought, slowly and painstakingly rendered pieces of clay such as Clementina’s ceramics.

There is still something endearing, surely, about the one-off, the uniquely crafted, the individually rendered work of ceramic art that endures, that you are not going to find when in Istanbul, or on Oxford Street, or made in China. Part of the ‘presence’ of these works (as Baudrillard puts it) is as a rejoinder – a counterpoint – to the easy global replicability of things, and the velocity with which an object can come into being and then disappear.

The text of Clementina’s invitation suggests that in contemplating the beautiful objects assembled here, we should dwell more carefully and thoughtfully on the intimate activities of eating and drinking at home: those exceedingly simple, yet symbolically dense, daily acts. Please do so, without rushing, and take some home with you.