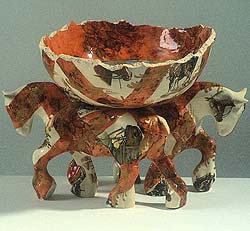 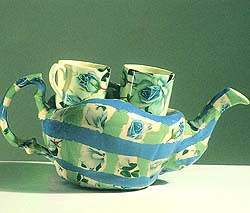 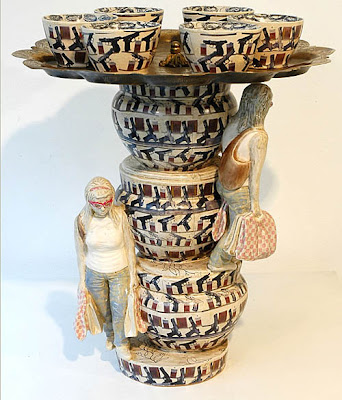 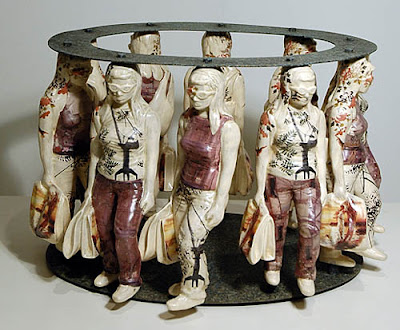 Yesterday I featured the ceramics of Julie Lovelace, today I am blogging about Carol McNicoll to whom I referred in the previous blog.

“In an age of information technology, making things by hand is a supremely anachronistic occupation. The first world has relegated the unglamorous and unprofitable activity of production to the third world, reserving the cleaner and more lucrative manipulation of information for itself. The capacity for making things has always seemed to me to be a defining human characteristic.

My work, which is made for the most part in slip-cast clay, is always conceived as inhabiting the domestic environment. Slip-casting is an industrial process, I use this partly because of its mimetic capacity, but mainly because the work both operates within and comments on the ceramic tradition as expressed within the domestic context. All my work is functional, I make things that I want people to use.

My current work explores the relationship between two and three dimensional figurative imagery. I am concerned with pattern and in this I have developed an extensive range of new decorative techniques. My work is very much concerned with the relationship between form and decoration. I am interested in the use of pattern to create ambiguity, and try to make objects that entertain while at the same time being slightly unsettling”

Carol McNicoll has an international reputation as a ceramicist. Her work explores the relationship between two and three dimensional figurative imagery, always within the context of functional ceramics. She has always been concerned with pattern, and uses glazes, open stock transfers and her own transfers to create richly patterned surfaces.

Born in Birmingham, Carol McNicoll studied Fine Art at Leeds Polytechnic and ceramics at the Royal College of Art, London. In 2001 she was short-listed for the Jerwood Prize for Ceramics and a major retrospective of her work toured the UK as part of the Craft Council‘s Show5 initiative in 2003-5.

Her work has currently been on show Contemporary British Ceramics at The Mint Museum, U.S.A