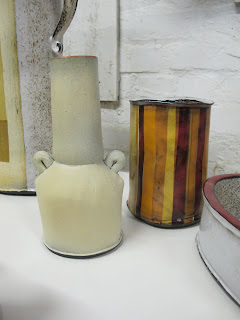 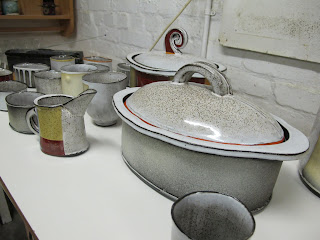 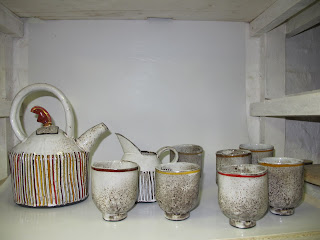 HENNIE’S TEA SET FOR A SHOW IN SHANGHAI IN DECEMBER 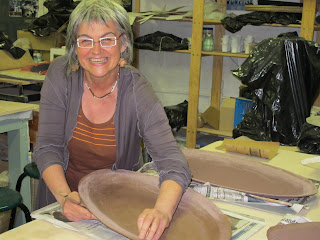 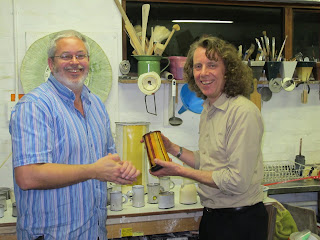 HENNIE MEYER AND ROBERT MULDERS IN THE STUDIO
On Sunday I spent some time in the studio of fellow-ceramist, Hennie Meyer. We are doing a joint exhibition in December at The UCT Irma Stern Museum. Hennie has several HUGE kilns, and I don’t…so he kindly offered to let me fire some rather large dishes in his kiln. I transported them (leather hard) by car (about 35 kilometers) and then left them to dry there. Yesterday I went to sand the edges before they were due to be bisque-fired.One had cracked…aah ceramics!

Next week I will collect them, then work on the surfaces and glaze them, schlepp them back to be glaze fired and then finally pick up the finished work…certainly a great labour of love and great generosity of a friend!

Robert Mulders – restauranteur at 6 Spin Street and also chairperson of the Friends of the National Gallery – is going to be giving the opening address at our show. He came around to chat to us about our work… We rounded off with pizzas made by Hennie and his wife Heleen….a great Sunday!
Tags
0